From 10 to 14 September, five Jordanian Judges of the Central Economic Chamber of the Amman Court of First Instance visited the Netherlands to exchange knowledge and practice on the Dutch and Jordanian judicial system, specialised chambers and (international) arbitration.

The Central Economic Chamber was only established in October 2017 with the rationale to tackle the rising number of economic and financial cases brought to the Court in the wake of the global financial crisis. With that, the Chamber is also aimed at contributing to promoting the country’s investment environment, capital stability and the country’s rating by global economic rating entities.Given the recent establishment of the Chamber, there is a need to strengthen the knowledge and skills of these judges in dealing with specialized chambers and economic cases and the principles of international arbitration. To cater to these needs, they met with Dutch professionals and visited Dutch legal institutions. 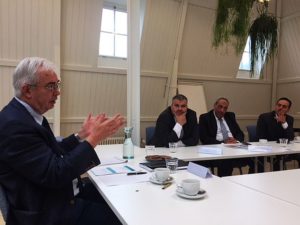 The visiting judges entered into a lively discussion with former President of the Hague Court of Appeal, Dr. Johannes Verburg on the Dutch judicial system. Comparisons were drawn with the Jordanian system and we quickly learned that there are numerous similarities.

The day then continued with an informal meeting with Bas van Zelst, Professor of Dispute Resolution and Arbitration and lawyer at law firm van Doorne. Over lunch, the judges and Professor van Zelst discussed the key features and practical aspects of arbitration in the Netherlands as well as international standards and good practices. Similar to the Netherlands, Jordan has an arbitration law in place based on UNCITRAL (United Nation’s Commission on International Trade Law). 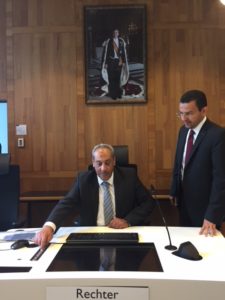 The delegation also visited Dutch legal institutions such as the Hague Court, the Permanent Court of Arbitration, the Amsterdam Court of Appeal and the Rotterdam-based law firm AKD. The AKD visit allowed the judges to not only look as a judge, but also see the consequences of their work through the eyes of a lawyer. Perhaps the most interesting visit was to the Netherlands Commercial Court (NCC). The NCC will open its doors in the near future, but the judges had the opportunity to get a ‘sneak preview’ of this unique court. The NCC will be a Dutch national court and will offer (international) parties a forum for commercial disputes including contract law, property law and company/corporate law disputes.

Meeting with the Jordanian Ambassador

On the last  day, the delegation and Mrs. Leontine Loudon of RVO enjoyed an informal lunch hosted by His Excellence Ambassador Nawaf Tell at the Embassy of Jordan in the Hague. This was an excellent occasion for exchanging experiences and knowledge gained during the visit. We all agreed that it been a meaningful exchange between the Jordanian judges and Dutch peers, experts and lawyers. Together we concluded that there are still various areas for future collaboration between the Dutch and Jordanian partners.

As a follow up to this exchange visit, the delegation met with the Ambassador of the Kingdom of the Netherlands to Jordan, H.E. Mrs. Barbara Joziasse. Please consult the Facebook page of the Embassy of the Netherlands in Jordan for more information.