Between 31 October and 4 November 2011, a high-ranking Indonesian delegation, headed by the president of the Indonesian Supreme Court (Mahkamah Agung) Dr. Harifin Tumpa visited the Netherlands. 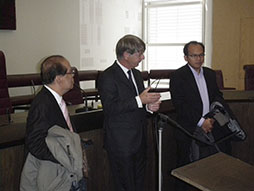 The delegation – consisting of a number of deputy presidents and justices of the Supreme Court, as well as the court’s registrar,  the director of the Training Center of the Supreme Court and four members of the Judicial Reform Team of the Indonesian Supreme Court – was invited for a counter visit by Mr. Geert Corstens (president of the Netherlands Supreme Court, the Hoge Raad), who visited Jakarta in 2010.

In 2011, the venue for a bilateral exchange of experiences and a discussion on a more structural cooperation was The Hague. With the financial support of the Netherlands Embassy in Jakarta and UNDP, CILC was asked to facilitate the visit and as such its staff closely cooperated with the Registrar of the Hoge Raad and the Indonesian Embassy in The Hague, as well as the Judicial Reform Team in Jakarta in order to make the visit a huge success. During the two days meetings at the Hoge Raad discussions between the Indonesian and Dutch colleagues focused around a number of topics: the introduction of the chamber system at the Mahkamah Agung, consistency in the decision making process at a court, case management and court administration, knowledge management and three specific topics in the area of civil, criminal and tax law. 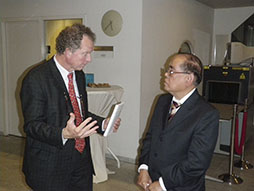 Besides the high-level discussions at the Hoge Raad, the Indonesian delegation also visited the Council of State and the Council for the Judiciary. At the visits to these two organizations, the Indonesian colleagues were informed about the tasks and the role of the respective institutions. Finally, a meeting with representatives of the Study and Training Center for the Judiciary took place in order to discuss specifics of the training program for judicial trainees, an area in which Dutch experts through the former National Legal Reform Program started to cooperate with Indonesia a couple of years ago. It can be concluded that with the working visit a strong basis has now been laid down for a revived Indonesian-Dutch cooperation in judicial cooperation, which will hopefully be unfolded in the years to come.