The event also served as a platform to promote and create awareness about The Hague Rules project. CILC is currently managing the project aimed at the creation of The Hague Rules which are scheduled to be launched in December 2019 in The Hague. Speakers of this event are also actively involved in the project and the drafting of the Hague Rules, including: 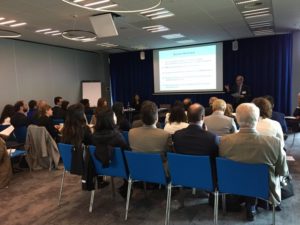 Multinational enterprises are not one legal entity and not subject to one global legal system. They operate under one brand and enjoy one profit, but the often many legal entities within the group have limited liability. They enjoy rights but have no duties under international law. States are frequently unable or unwilling to hold companies accountable and the market is an ineffective accountability mechanism. On a global level, the judicial remedies are still under-developed since national laws are scattered and negotiations for an international treaty are in the initial stages. The Hague Rules project aims to establish an international regime for the resolution of disputes in the field of BHR. As a private judicial regime, this may be attractive to both corporations and alleged victims. It is neutral and, through the New York Convention of 1956, may result in foreign enforceability of the arbitral awards.

Ashwita Ambast then followed with a second plenary session focusing on the Bangladesh Accord arbitrations as a case study. The Accord enshrines binding commitments by apparel brands that hazards in their supplier factories are to be inspected and remediated, and that sufficient funds are available to maintain sourcing relationships. It also contains a complaints mechanism and a dispute resolution process referring to arbitration of disputes resulting in legally binding enforceable awards against the signatory fashion companies. The arbitration provisions in the Accord were put to the test publicly for the first time last year when two global workers’ unions petitioned the Steering Committee, alleging failure by two signatory fashion brands to comply with Articles 12 & 22 of the Accord. The main lessons learned from the process of arbitrating the two cases are summarised into the 4 Cs: Consent, Composition, Confidentiality and Cost. These 4 Cs represent the key gaps in access to arbitration. 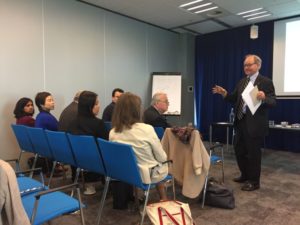 Participants of the working session were then split into four breakout groups, each led by one of the session speakers, with a goal to discuss and further elaborate on these learning points from the PCA Bangladesh Accord arbitrations, suggesting improvements on them as they relate to access to arbitration as an international dispute resolution mechanism. After the end of the breakout group discussions, the working session closed with a plenary recap of the different break out groups on their outcomes, recommendations and conclusions facilitated by Giorgia Sangiuolo who provided further insights and comments into the topics addressed. The main points are summarized below.

The Hague Rules on Business and Human Rights Arbitration