The purpose of the project is to support and assist key Albanian justice institutions (Ministry of Justice, Office for the Administration of the Judiciary Budget, High Council of Justice, High Court, Prosecutor-General Office, Courts, National Judicial Conference, Parliamentary Law Committee, School of Magistrates, National Chamber of Advocacy and the National Chamber of Notaries) to bring their performance closer to EU standards.

High level representatives of these Albanian institutions (besides the State President and Minister of Justice, also the Prosecutor-General Adriatik Llala and Chief Justice Prof. Dr. Xhezair Zaganjori) adhered to the objective of the project – to strengthen the independence, transparency, efficiency, accountability and public trust in the Albanian justice system in line with the EU acquis and best practices – in their respective addresses at the opening ceremony, which was attended by around 150 representatives of the Albanian beneficiary institutions, embassies, the media and consortium partners. Moreover, the Albania representatives pledged their full support for the implementation of the judicial reform process and expressed their expectation about the EURALIUS mission in guiding the Albanian counterparts through this process. 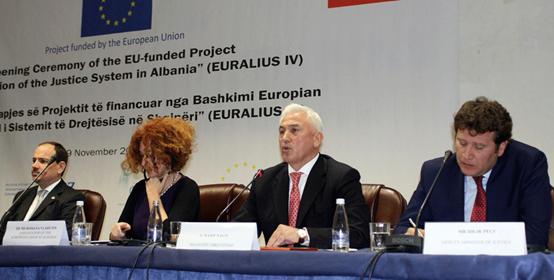 The project is implemented by a European consortium consisting of Austria through the Agency for Economic Development (AED); Germany through the German Foundation for International Legal Cooperation (IRZ) as lead and the Netherlands through CILC. The mission consist of 5 international long-term experts, 5 national long-term experts, support staff and a pool of Short-Term and Mid-Term Experts. The project will run for 40 months and is structured in five components: (1) justice reform and organization of the Ministry, (2) High Council of Justice and High Court, (3) criminal justice and prosecution office, (4) judicial administration and efficiency and (5) legal professions and School of Magistrates.

More information about the project can be found at: www.euralius.eu