On 13 June 2018, the official kick-off of the EURALIUS V project took place in Tirana. The EURALIUS mission is a broad justice reform mission to assist the Albanian authorities in the process of judicial reform. Whereas the previous phase of EURALIUS focused on the development of the judicial reform strategy, the current phase, which will last three years, will mainly support in the implementation of the judicial reform. The EURALIUS V project will be implemented by a European consortium consisting of the German Foundation for International Legal Cooperation (lead), Dutch CILC, the Austrian Agency for Economic Development and the Italian Consiglio Superiore della Magistratura. A broad team of international and national long-term experts, supported by international and national mid-term and short-term experts will be focusing on the establishment of the new institutions for judicial self-government, new working methods in courts and prosecution offices and the enhancement of skills of judicial office holders and support staff of courts and prosecution offices. At the kick-off event, it was stressed that EURALIUS V comes at a crucial moment for Albania. At the end of June 2018, the European Council has to decide to start accession negotiations with Albania or not. 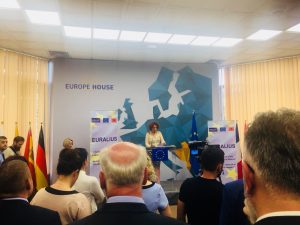