The first expert mission of the Judicial Sector Support Program (JSSP) to Indonesia has taken place between 12-23 January 2015, involving support to strengthening the chamber system at the Indonesian Supreme Court (Mahkamah Agung) and support to the improvement of the Judicial Training Center (JTC) and the Prosecutorial Training Center (PTC). Delegates of the Netherlands Supreme Court (Hoge Raad) and the Dutch Training and Study Center for the Judiciary (SSR) have conducted a summary analysis and a series of focus group discussions with their counterparts and the relevant stakeholders, to reconfirm the focus of cooperation. The formal launch of the program and the first Steering Board Meeting were also organised during this mission.

Launching ceremony and Steering Board Meeting

JSSP was launched in Jakarta on 13 January 2015 by His Excellency Mr. Rob Swartbol, Ambassador of the Kingdom of the Netherlands, and by Mr. Hatta Ali, the Chief Justice of Mahkamah Agung. In the opening ceremony speeches, they were joined by Mrs. Rosa Jansen, Chair of the Executive Board of SSR, and jointly underlined the roles of the courts in upholding legal certainty and of judicial training institutions in supporting the reform process.

Directly before the ceremony, representatives of the project partner institutions and the donor held a first Steering Board Meeting to discuss the implementation of the Program. 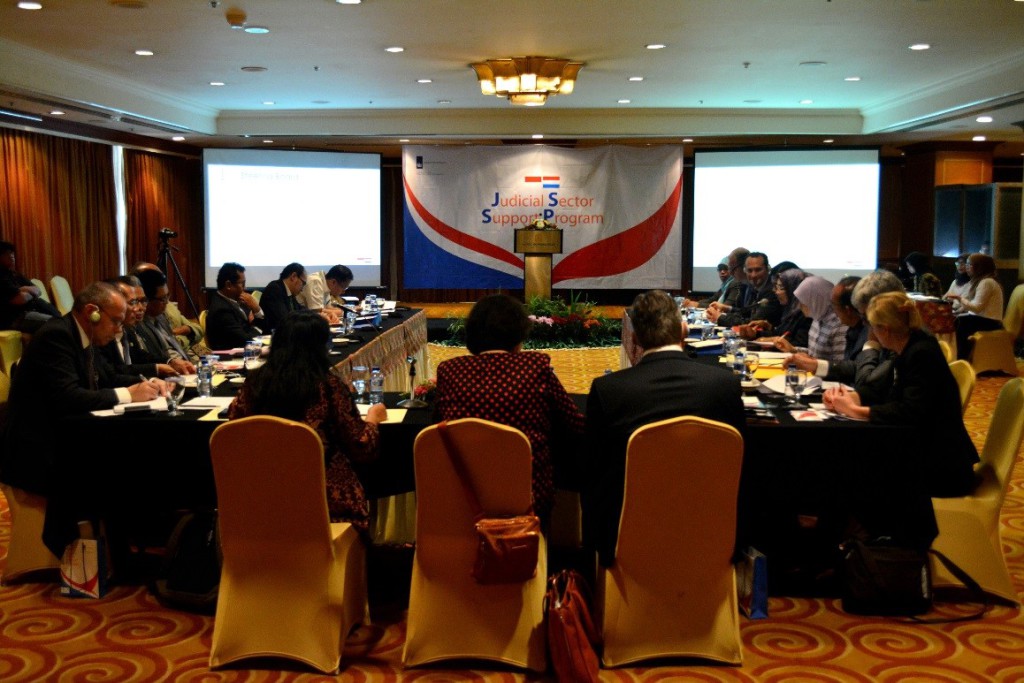 The Steering Board members expressed their readiness to support the implementation of the program, as well as the expectation that it build on the experience of past cooperation projects and contribute to development in Indonesia by promoting the independence of the judiciary, among other things. They also provided valuable input on technical elements of the program, such topics of interest for Indonesian justices and suggestions regarding the research on court budgeting.

Implementation of the chamber system

During their visit, delegates of the Netherlands Supreme Court, Hans Storm and Ädwin Rotscheid, conferred with the members of the Working Group Case Management of the Indonesian Supreme Court (Pokja Manajemen Perkara Mahkamah Agung) on the implementation of the chamber system introduced to Indonesia in 2011. The session was led by the Deputy Coordinator of the Judicial Reform Team, Justice Takdir Rahmadi, and the Coordinator of the Working Group, Justice Djafni Djamal.

It is worth noting that the chamber system in Indonesia is inspired also from Dutch practice. Bilateral supreme court cooperation (established as of 2010 by the former Dutch Chief Justice Geert Corstens and the former Indonesian Chief Justice Harifin Tumpa) has contributed to supplying good practice models for the design of rules and procedures. In the meantime, the chamber system in Indonesia has undergone a number of changes (which might also be interesting for the Netherlands), such as the formation of chambers, case proceeding by all panel members simultaneously, and the use of the e-court file system. These developments have successfully accelerated proceedings and reduced the case backlog.

Discussions with the WG Case Management and with representatives of Indonesian civil society organisations brought to light at least two significant current challenges: (1) how the chamber system can contribute to promoting legal certainty, and (2) how the influx of cases can be reduced (according to current statistics, the influx of cases from the high courts is still high). 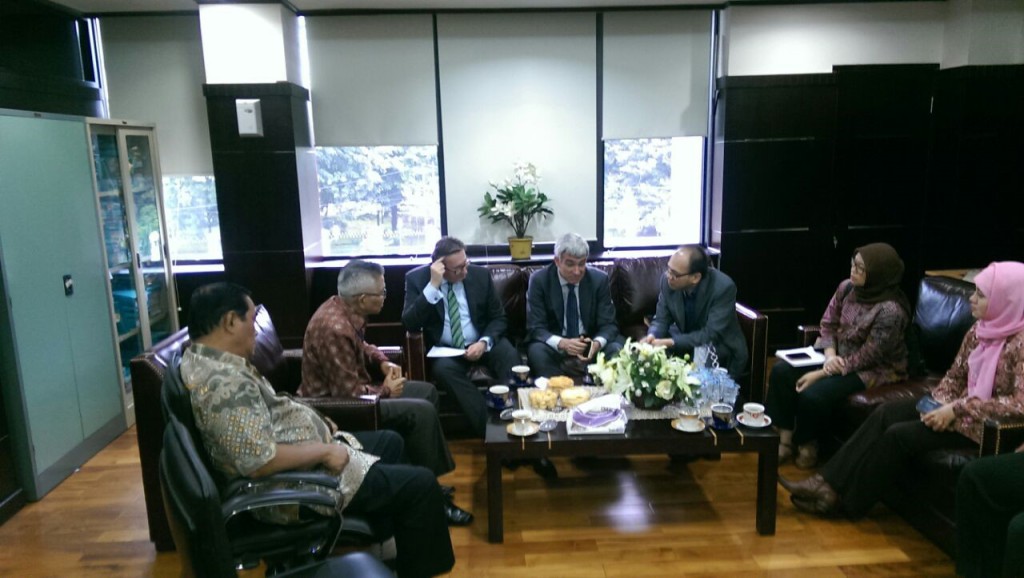 SSR delegates received a warm welcome from their Indonesian colleagues in the judicial and prosecutorial training centres (as represented by the Head of the JTC, Siti Nurdjanah, and the head of the PTC, Muhammad Salim), as well as from members of the Judicial Commission.

Courtesy meetings were followed up with baseline assessment work at the JTC, to be continued until April by SSR experts Tonnie Hulman and Anne Tahapary. First findings, collected during the site visit through interviews with JTC staff and discussions with local resource persons, indicate that the training institute, established as late as 2006, is faced with significant challenges in organising its courses regularly and continuously. At first glance this appears to be caused by basic institutional conditions, such as the still ambiguous status of judges (civil servants or judicial officials?), the frequent rotation of staff (in the case of PTC), or the national budgeting system. The lack of comparative perspectives hitherto also seems to slow down development. 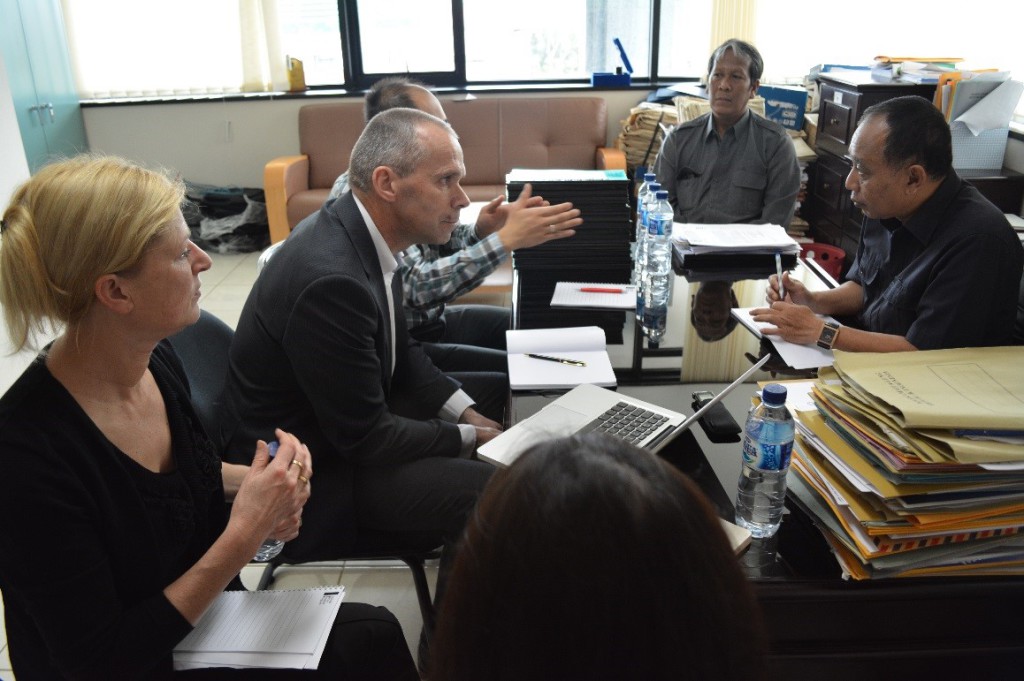 With the support of JSSP, in the upcoming months it will be further analysed how the Netherlands Training and Study Center for the Judiciary will be able to best contribute to the development of the JTC and the PTC in Indonesia.