Indonesia // Is restorative justice the solution for overcrowding in prisons?

Indonesia and the Netherlands share a long history and therefore a similar legal DNA. Consequently, they have collaborated over decades to support legal and judicial reforms. On 14 December 2020, a webinar on restorative justice was organized by Indonesian and Dutch experts, facilitated by the Peer to Peer for Justice Project funded by the Dutch Embassy in Jakarta. The webinar aimed to discuss whether restorative justice is a solution to Indonesia’s overcrowded prisons, by highlighting its positive impact in both the Netherlands and Indonesia over the last few years. It was attended by 145 participants from both the Netherlands and Indonesian, including judges, probation officers, researchers, students, and members of the legal society.

The webinar kicked off with opening remarks from Willem van Nieuwkerk director, Center for International Legal Cooperation and Prahesti Pandanwangi, director of Law and Regulation, National Development Planning Agency. Restorative justice is not a new concept in Indonesia and has been given a firmer status in the juvenile criminal justice process since 2012. For adult offenders, restorative justice is seldomly applied. Indonesia’s adult prison capacity has exceeded its limit by 85 percent, with even higher percentages in some areas such as Bagan Siapi Api Prison in Riau, Sumatera. Restorative justice could help lower these growing rates in adult prisons.

In the second session of the webinar which reflected on Restorative Justice and correctional practice Dodot Adikoeswanto, director of IT and Cooperation of the Directorate General for Correctional, stated that Indonesia has an annual increase of 15.000 inmates which are accommodated in already over-crowded prisons. Inspiring a mindset shift of Indonesian society from punitive behaviour to restorative justice will require a lot of work. However, doing so will enable law enforcement and judicial personnel to apply imprisonment less as the only and main penalty for offences. Linda Biesot, account manager Social Domain at the Netherlands Probation Service, promoted the success of the Dutch Probation Service in optimizing alternative sanctions through community service (a component of restorative justice).

The discussions were moderated by Jochum Wilderman, head of the International Department of the Netherlands Probation Service, and Jane Aileen Tedjaseputra, programme manager at the Indonesian Institute for Independent Judiciary.

The main conclusions from this webinar on restorative justice as a method to help solve the overcrowding in the Indonesian prisons were:

Undoubtedly, prison overcrowding is an issue that needs immediate attention and consequently, so is restorative justice. This was affirmed by Indonesian senior government officials Ms. Prahesti and Ms Linggawati Hakim, advisor to Ministry of Law and Human Rights, when they responded to the speakers. There is a clear need for policy change to support society in understanding the importance and impact of restorative justice. 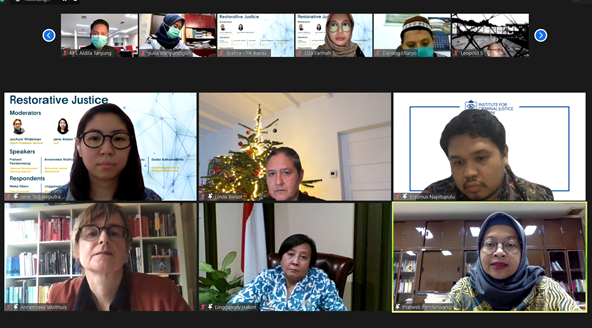