The Judicial Sector Support Program (JSSP) has launched three explanatory documents (also referred to as “restatements”) on 17 May 2017 at the Erasmus Huis in Jakarta. The event was attended by 115 participants from the Indonesian legal community, including representatives of the Supreme Court (Mahkamah Agung), the Attorney General Office (Kejaksaan Agung), the Anti-Corruption Commission (KPK), and the Ministry of Law and Human Rights. Judges, lawyers from different law firms and government institutions, legal academics and NGO activists attended the event to discuss three topics presented by the researcher teams that worked under the supervision of the Van Vollenhoven Institute (VVI) of Leiden University. The project leader, Prof. Adriaan Bedner, was represented in the discussion by his assistant, Mr. Imam Nasima. 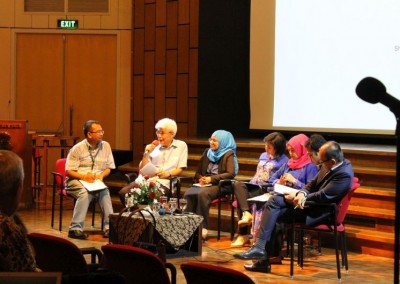 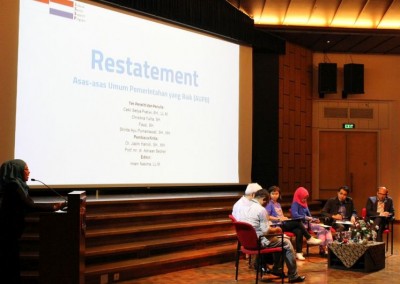 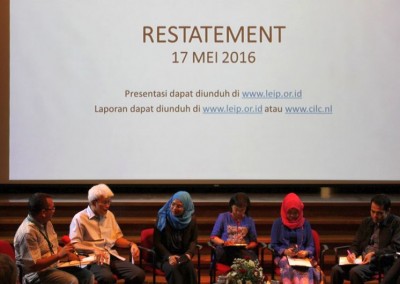 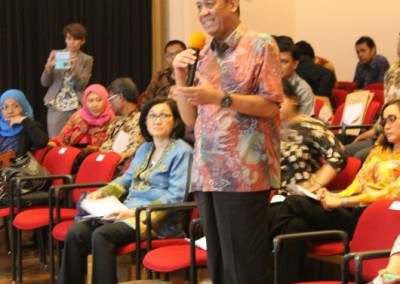 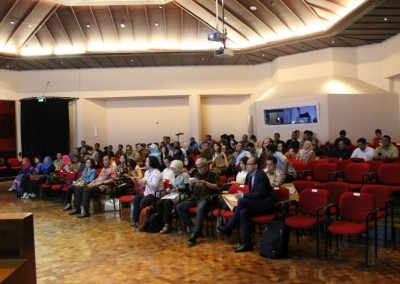 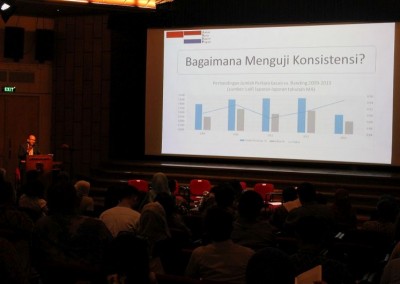 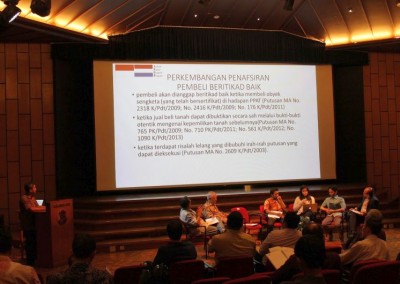 The launching began with speeches by the representative of the Embassy of the Kingdom of the Netherlands, Mr. Maarten van den Bosch, and the representatives of Mahkamah Agung, Prof. Takdir Rahmadi and Prof. Basuki Rekso Wibowo. Mr. Van den Bosch highlighted that the complex JSSP project includes among its objectives strengthening legal certainty in Indonesia, through support to the legal community in developing legal discourse. Prof. Rahmadi then stated that the establishment of the Chamber System by Mahkamah Agung in recent years – in order to uphold the uniformity of the application of the law and legal consistency – has required comprehensive sources that capture the current state of the law applied by the court. He added that the explanatory documents could also be used by the members of legal community as the point of the departure of continuous discussions. Echoing his colleague, Prof. Rekso Wibowo reminded the audience that the event was not only intended to present the results of the research, but also to collect feedback.

At the end of the opening session, Mr. Nasima explained the process of developing the explanatory documents and underlined the remaining challenge in upholding the uniformity of the law and legal consistency. Since the introduction of the Chamber System in 2011, Mahkamah Agung has been wrestling with the impacts of inconsistency, where roughly 90% of lower courts’ judgements nationwide are followed by cassation procedures. This indicates insufficient (or structurally ignored) guidance for law practice. As a result, Mahkamah Agung has unnecessarily been burdened by cases that could either have been resolved by lower courts or where conflicting parties could have known that such a procedure would lead to no avail. This challenge can only be tackled by law makers, legal practitioners and academics in reinforcing the ruling aspects of law.

The presentation session was opened by the researcher team led by Ms. Shinta Agustina from Andalas University, Padang, who has studied the ‘unlawfulness’ of the corruption offense. The result of the research was among other reviewed by Mr. Chandra M. Hamzah, a former anti-corruption commissioner, who also attended the event. This session turned out to be the most dynamic session of the day. Different questions arose from the audience, who had to a large extent already acknowledged the issues in the Law on the Eradication of Corruption, which does not define the offense (of self-enrichment) properly and does not distinguish it correctly from the misuse of power. In practice, this leads to a lack of uniformity, and as a result, also to the unequal treatment of suspects. The problem is, as Mr. Hamzah added, that the law maker did not explain clearly how the rule should be applied, so it became the task of Mahkamah Agung to provide guidance. Mahkamah Agung had already issued an opinion on the discrepancy between the two offenses, but the researcher team recommended to revise the latter by proposing an alternative approach, described in the explanatory document.

The second session focussed on the application of the General Principles of Proper Administration (GPPA) in Indonesia. Ms. Cekli Setya Pratiwi, the lead researcher, presented her team’s findings and recommendations and explained how statutory law already acknowledges the GPPA, but with insufficient clarity prevailing about how a judge should apply the principles in concrete cases. To offer such clarity, the researcher team proposed a number of indicators and leading examples in their report, but also recommend, in the spirit of legal certainty, that Mahkamah Agung specify and confirm the violation of a particular principle in its judgement. Mr. Irfan Fachruddin, a senior administrative justice sitting in the panel, appreciated the research on this issue and noted that it might have been better for judgements to be classified into confirming or dissenting rulings, in which consensus or conflicting opinion can clearly be seen. Ms. Cekli Setya Pratiwi answered that the report has defined each principle specifically by referring to the relevant judgements. In future, it will be the legal practice that proves whether these definitions will be used consistently.

The last session included the presentation and discussion of the third explanatory document, which tackles the definition and scope of the good faith doctrine in land transfer. Mr. Widodo Dwi Putro, the author, explained that disputes are commonplace between the original owner and the purchaser of a piece of land, due to the common Indonesian practice of transferring land based on faith alone and due to some obscurity in the implementation of the land register policy. In order to clarify this issue, a thorough study was conducted on the laws, literature and judgements from the 1950ies to date. The lack of definition in the regulations was something of an obstacle, but Mr. Dwi Putro and his researcher team have re-defined the concept on the basis of court judgements and have underlined the ‘duty of care’ of the purchaser. The presentation received positive feedback from panel discussant, Mr. Atja Sondjaja, the former chairman of the civil chamber of Mahkamah Agung, who argued, however, that the legal issue in this case should be seen from the perspective of the original owner. Unlike the recent approach of Mahkamah Agung, he said, it is not the purchaser who should prove their good faith, but the original owner who should prove the lack thereof. The report has not discussed this evidentiary aspect in particular, but the point of departure remains similar. In one of his statements, Mr. Dwi Putro stated that the purchaser cannot be deemed as having acted in good faith, if they do not fulfil a number of requirements. In addition to this feedback, the participants have also discussed the need to strengthen the land register system in protecting ownership.

The moderator, Mr. Anggara Suwahju, closed the event as scheduled. It had been a heavy, but inspiring discussion forum on three different legal issues, in which the members of the Indonesian legal community had the opportunity to share their views and acknowledge challenges ahead in promoting the rule of law. The high number of participants confirms the need of such a forum, in addition to the development of sound legal research that is sharpened by a relevant comparative perspective.

The digital versions of the three documents are available on the project website.