Indonesia // Musical and legal harmony: the ease of doing business

The President of the Dutch Supreme Court, Maarten Feteris, was invited by his friend and colleague Mr. Hatta Ali, Chief Justice of the Indonesian Supreme Court, to attend the presentation of the Annual Report 2018 on 27 February 2019. The two Supreme Courts have been working together for many years in the framework of the JSSP project of CILC.

In the wake of this event, Maarten Feteris gave a speech and musical intermezzo at the Erasmushuis of the Netherlands Embassy in Jakarta. This event focused on the relation between rule of law and sustainable economic development and in particular on the ‘ease of doing business’.

Considering Indonesia’s economic development and its prospects of growing into one of the biggest economies in the world, Dutch government will end its support to Indonesia as beneficiary of development cooperation in 2022. Having the potential of being one of the largest world economies, consistency and predictability of Indonesian law remains key. A legal system that can provide fast, simple and cost effective dispute resolutions will contribute to enhancing legal certainty for the people and business community in Indonesia.

The event was opened by H.E. Rob Swartbol, Ambassador of the Netherlands Embassy in Jakarta, in which he referred to a quote by Plato: 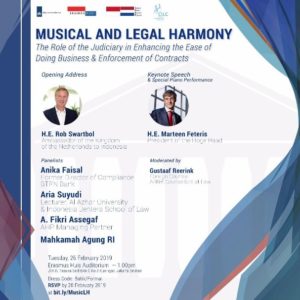 “Music is a moral law. It gives a soul to the universe, wings to the mind, flight to the imagination, a charm to sadness, and life to everything. It is the essence of order, and leads to all that is good, just and beautiful, of which it is the invisible, but nevertheless dazzling, passionate, and eternal form.’’

Maarten Feteris then kicked-off by underlining the importance of legal certainty and predictability of the law for the business community and society as a whole. The higher the ease of doing business the more prosperity. This is also important for Indonesia, which has the ambition to rise to one of the biggest economies of the world.

His speech not only appealed to the intellectual senses of the audience – consisting mainly of law students and professionals, lawyers and business men and women – but also the artistic senses.

Based on the many smartphones that were suddenly put in the sky, the highlight of the event was about to start. Maarten Feteris moved from the microphone to the piano and performed a self-composed piece of music. He played several sections that he especially composed for the opening of the new building of the Hoge Raad in May 2016. If Plato could attend he would have agreed it was a ‘’dazzling, passionate, and eternal performance.’’