Transitioning ‘from the rule of law to a culture of law’’ is what Indonesia needs according to Yenni Wahid, Director of the Wahid Institute and daughter of late president Wahid. She and some 300 participants gathered for the annual conference entitled: Indonesia – Netherlands Rule of Law and Security Update (INLU) on 17 and 18 January 2018 in Jakarta, Indonesia.

Against the background of the longstanding cooperation between Indonesia and the Netherlands in the field of rule of law, a broad constituency of Indonesian and Dutch organisations, individuals and government bodies organised the third INLU with the view to highlight the achievements of the bilateral cooperation and to explore opportunities in order to further strengthen the relationship.

In his welcome speech, the Dutch Ambassador to Indonesia, Mr. Rob Swartbol, noted that the shared legal foundation has been the basis for the longstanding judicial cooperation with Indonesia, in particular within the framework of overseas development aid (ODA). With Indonesia now entering into a new phase as middle-income country, this shared legal system can still provide a good basis to continue the relationship, yet based on a more equal exchange of experiences and knowledge. Mr. Swartbol for example mentioned that both countries face similar challenges in relation to cybercrime, radicalization and diversity and he expressed the interest to learn from each other on how to address these pressing challenges.

The INLU hosted 12 thematic panel sessions organized by Indonesian and Dutch organisations with some of them indeed focusing on challenges including on how to create an inclusive society and how to regulate internet use and deal with cybercrime. Other sessions focused more on elements of the judiciary system where Indonesia and the Netherlands have or have had a meaningful cooperation. For example the session organized by CILC and the Indonesian Centre of Law and Policy Studies (PSHK) on regulatory practices. There is currently no single entity responsible for ensuring quality and for providing a measurable oversight mechanism which contributes to the complex and incomprehensive regulatory practices in Indonesia. Since a few years, the Netherlands provides support to the Indonesian Government to improve the technical capacity of its legislative lawyers with the view to, amongst others, contribute to enhance the regulatory practice in Indonesia. 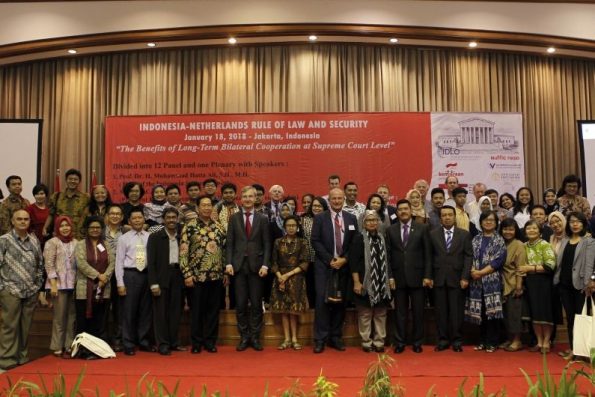 The INLU was closed with a dialogue session of Supreme Court Chief Justice Hatta Ali and Supreme Court President M.W.C. Feteris on their longstanding cooperation. Feteris applauded the openness and willingness of his Indonesian colleague to make progress and is glad to note that he is preparing for a follow up plan for the next five year in order to further strengthen the chamber system. Their cooperation has now been extended with another five years in a Memorandum of Understanding which was signed by both parties the next day on 19 January.

Of course, the similarities in our legal systems will remain an important source for judicial collaboration in the years to come. Prominent areas for future work can be found in education, joint research and peer-to-peer as mentioned by CILC director Willem van Nieuwkerk during the panel session on the future of Indonesia-Netherlands cooperation.

However, with the phasing out of the Dutch ODA, a unique window of opportunity arises to explore new and innovative forms of future bilateral collaboration. The INLU conference has made an important contribution to taking a first step in this direction.