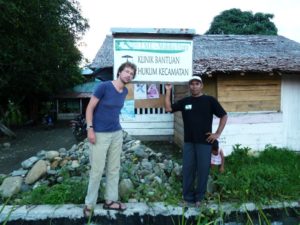 Ward and Delfius in Buli

Buli is a village of red and green. This coastal village in East Halmahera (North Maluku) is surrounded by dense forests, interspersed with red ‘cuts’: these are the places where mining companies have removed the top soil to mine the nickel and gold in the soil. Since about twenty years big multinational mining companies have been extracting these metals around Buli’s wooden houses. The arrival of these rich and powerful companies led to a long-standing struggle with the largely uneducated and poor villagers, who demanded compensation for resulting pollution and the use of the ‘adat’ (customary) land.

Pak Delfius Batawi is one of the most prominent villagers in this struggle. Since 2007 he has been trained by a legal aid NGO on Indonesia’s laws and legal procedures. Since then he calls himself a paralegal: “I decided to join the program because it is a method to help poor people. After the training I realized how people are being cheated and exploited. I want to use my knowledge of the law to help people deal with that. Now with the network [from the legal aid NGO] we have the braveness to solve cases. We convinced the people that we could solve their problems.”