In the first week of December 2018, the President of the Netherlands Supreme Court (Hoge Raad), Maarten Feteris visited the Indonesian Supreme Court (Mahkamah Agung). The two Supreme Courts have been working together for many years now. This last visit was dedicated to work on realizing the ambitions of the MoU that was signed almost a year ago between the two chief justices.

Through this MoU the Supreme Courts are committed to roll out until 2023 a work plan with a focus enhancing legal certainty in Indonesia through three interrelated areas of collaboration:

1) reducing the inflow of cases,

2) enhancing the chamber system, and

Interestingly, this time the setting was different. The consultation between the Supreme Courts were held in more interactive work forms combining both plenary and group working sessions and involving  almost all justices of the five different chambers (in total more than 100). This approach resulted in very open, constructive and practice-oriented discussions. More importantly, the justices moved beyond the stage of discussing IF things should change to HOW things should change. This was seen as a major sign of commitment from the leadership of the Mahkamah Agung to further its ambitions in the MoU and the Indonesian reform agenda.

The delegation of the Hoge Raad and various staff of the Mahkamah Agung (leadership, head of chambers, justices, assistant-justices, registrars, head of PR and head of IT) were engaged in working sessions. Being split into groups, participants worked on case studies, SWOT analyses and business models. For many this was quite a new exercise, yet, the experiences and feedback was very positive. 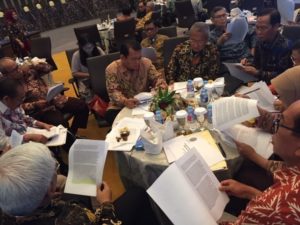 A good example was the Thursday work session on the distinction between the question of law and the fact in the process of case selection. This is a particularly ambiguous distinction for the justices of the Mahkamah Agung because – contrary to their Dutch peers – they receive both type of cases. In deciding on a case both legal and factual aspects matter for them. In the Indonesian efforts to reduce the inflow of cases, however, rejecting cases that only have factual elements could be a step forward. This would be a similar approach as the Hoge Raad, where only cases with important legal implications are considered.

In this session, the justices were grouped per chamber (civil, criminal, tax) and each group received a past judgement of related chamber of the Hoge Raad. After having discussed the judgement, the respective group had to identify all legal questions arising from the case and share the outcomes with the other groups and the delegation of the Hoge Raad as a starting point for an open debate on this topic.

An interesting element of these work sessions is that it allowed the justices of the Mahkamah Agung to formulate recommendations and concrete ideas towards their leadership to what next steps could be taken in the reform process. Participants witnessed the willingness of the Mahkamah Agung leadership to listen and accept the recommendations provided. The session ended with a broad consensus that the Mahkamah Agung should speed up the process of reforming its case selection mechanism and that it has to look into what criteria are useful for this purpose.

Great momentum to take the next concrete step: installation of case selection team

During the week the partners experienced how a combination of efforts and activities can contribute to the overall ambition of enhancing legal certainty. Another important result of this visit is therefore the confirmed commitment of the Mahkamah Agung leadership to enhance its case selection mechanism and increase the frequency of the chamber meetings that are taking place. It will thus be important that the working group on case selection will visit the Netherlands in the new year to further exchange knowledge and experiences on case selection and the functioning of an effective chamber system.

With Indonesia having the potential of being one of the largest world economies, consistency and predictability of the law is key. This will contribute to enhancing legal certainty for the people and business in Indonesia. With this visit we strongly believe we have taken some promising steps in this direction.

During this mission, the President of the Hoge Raad also provided a key note speech at a conference attended by 105 deans from law faculties all over Indonesia. The central issue of this conference was the study of case law and its application in legal education. To read the article of this event please click on this link or watch the vlog here.