‘We are like one family’ said Mr. Sunarto, Vice Chief Justice of the Indonesian Supreme Court (Mahkamah Agung), during his visit to the Dutch Supreme Court (Hoge Raad) in the Hague. He and eight other justices and assistants were invited by the President of the Hoge Raad, Mr. Feteris, for a working visit in the context of Judicial Sector Support Programme (JSSP). The project is funded by the Netherlands Embassy in Jakarta. 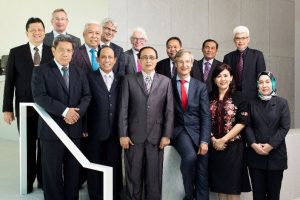 The partnership between the two institutions is ongoing for decades and was recently renewed with a second Memorandum of Understanding (MoU). This visit made very clear how both parties appreciate the partnership and are committed to support the ongoing reform at the Mahkamah Agung. The purpose of this visit was to exchange information and experience that could feed into these reformatory developments.

The visit, which took place from 2 to 6 July 2018, was officially opened by speeches from Mr. Sunarto and Mr. Feteris on Monday 2 July. Members of the Netherlands Ministry of Justice and Security and the Indonesian Embassy to the Netherlands also attended this meeting.

Mr. Sunarto shared an update on some impressive reforms the Mahkamah Agung, including the implementation of a chamber system. The Mahkamah Agung has managed to reduce half of the workload in 2017 compared to the years before. 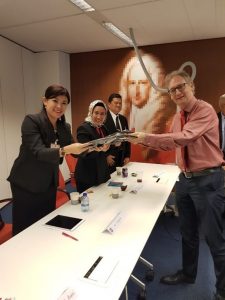 Additionally, such an approach also helps to select relevant cases and hence limit the inflow. The Mahkamah Agung informed the Hoge Raad that they have established a working group and introduced a simplified format for case selection to decrease the inflow and to reduce the backlog of cases. We applaud our Indonesian colleagues for their drive for change and improvements and hope the partnership continues to be a source of information and inspiration.

The working visit also included visits to the Dutch Training and Study Centre for the Judiciary (SSR) and the Van Vollenhoven Institute of the Leiden Law Faculty. Both institutions are part of JSSP. On the last day, the visit was closed with an informal lunch where words of appreciation and gifts were shared abundantly between the Mahkamah Agung, the Hoge Raad, CILC colleagues from the Hague and Indonesia and the Indonesian Institute for Study and Advocacy for Judicial Independence (LeIP). A next visit is planned to take place in Jakarta, Indonesia in the fall of 2018.