Inside CILC: Stories from an enforcement agent about capacity building in civil enforcement (2/2)

One of the CILC projects Uitdehaag proudly recalls is the Balkans Enforcement Reform Project (BERP), which took place in the Western Balkans and Albania in 2008-2011. In all of the project countries, he and his CILC colleague Eric Vincken often had to reinvent the wheel. 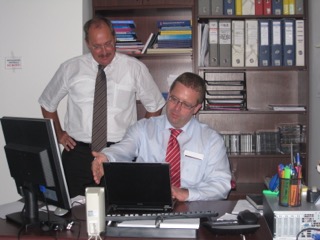 Uitdehaag: “For example, one of the problems we faced was that the Netherlands had recognised Kosovo as a country, as one of the project countries from former Yugoslavia included in the BERP. However, Serbia did not recognise Kosovo and still perceived it as its province. Then, what do you do when you would like to invite all project countries together for regional meetings, a major focus within the project? Can Kosovo bring its own flag? How will Serbia react?” Neither the Dutch ambassador in Belgrade nor the one in Pristina could help them out. “We figured that as long as we did not mention the word ‘country’ but used ‘legal systems’ instead and did not allow any flags on the table during the meetings, it would be acceptable for both Serbia and Kosovo to attend. From the very beginning of the project, we managed to have both of them around the same table and on speaking terms.” Proudly: “I believe that at the time, we were one of the first international projects that managed to do this.” In Bosnia and Herzegovina, another widely divided context, Uitdehaag and Vincken successfully adopted the same approach of using ‘legal system’ as opposed to ‘country’.

“I want you to write a new law” she demanded. The law had only been adopted two weeks earlier.

During his various activities, Uitdehaag experienced how politics and law are often intertwined in the project countries he works with. For example, in one of the Western Balkan countries, Uitdehaag and his colleagues had a meeting with the Minister of Justice. The country had just adopted a new piece of legislation, mostly dictated by international observers. He recalls: “She told us the law was ‘crap’ and threw it over the table. “I want you to write a new law” she demanded. The law had only been adopted two weeks earlier.” Uitdehaag does not remember the exact amount of flights they took to complete that assignment. “In one year at least 140.”

On the other hand, in another Western Balkan country, Uitdehaag participated in a working group to draft new legislation, that finally was also adopted by the Parliament and involved major changes in both the enforcement procedures and the organisation of enforcement. Only a few weeks before the implementation of this law, there was a change of ministers of justice in the country and the new minister was fully opposed to it. “First, the implementation process of the law was delayed and, eventually, he completely abolished the law. That caused a lot of disappointment, with us but also with our local partners. We had put quite some effort into it, in particular since the country aspired to become an EU member state.”

He also became aware of the strong influence a ruling political party in a country can have on its legal system as, for example, happened in one of the Asian countries he worked with. “The conference I was to attend had been cancelled, since the ruling political party had not been informed of it in time. First you notice the president of the court and next to him a representative from the party, all the way through the hierarchy of the court. That was very strange, I had not experienced anything like that before.” 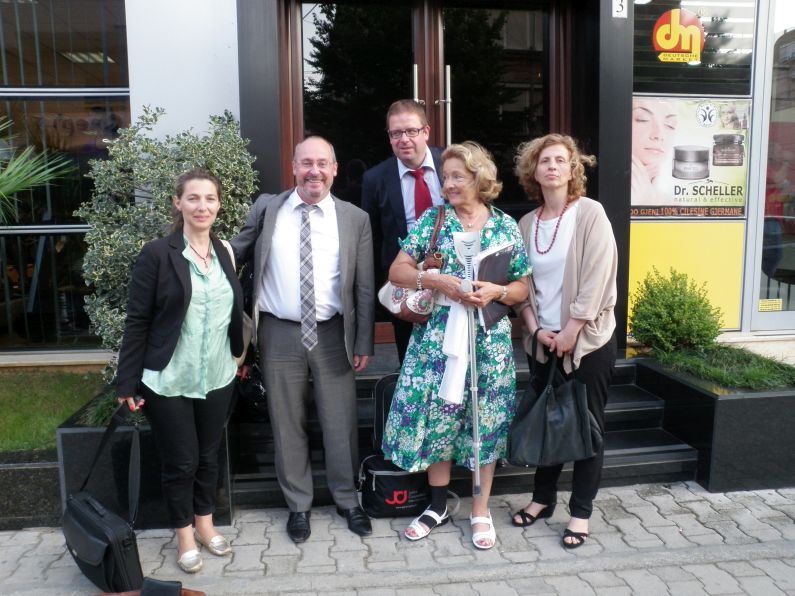 An enforcement system that respects the rule of law will also guarantee humane standards of living. Human rights and human dignity should always have priority.

A person that has really inspired Uitdehaag in his work in the field of rule of law and facilitating good functioning legal systems has been the South African activist and former Constitutional Court judge Albie Sachs (1935). Sachs used to work together with Nelson Mandela, he developed the code of conduct for the African National Congress (ANC) and went into exile in the United Kingdom under the apartheid regime and later into Mozambique. In Maputo, a bomb was placed under his car by the South African security services, which nearly killed him and cost an arm and the sight in one eye. When Nelson Mandela became president of South Africa, Sachs returned to his country. He was one of the drafters of the South African Constitution and in 1994 became a judge of its Constitutional Court. Uitdehaag: “If you hear Sachs discussing the link between the South African social situation, such as the townships, and how one could translate such societal broad issues into a constitution, it is very inspiring. He really has been one of the most important people I have ever met.” Uitdehaag emphasises the importance of a well functioning legal system for democracy and the protection of human rights. “We have noticed the inhumane consequences of the financial crisis. Also in the field of enforcement the rights of all parties need to be respected. Obviously, there is the claimant who wants the judgment enforced. However, the rights of the defendant should be respected too. An enforcement system that respects the rule of law will also guarantee humane standards of living. Human rights and human dignity should always have priority.” According to Uitdehaag, contributing to a well balanced system is what makes his work so interesting. “I experience that everywhere I go, whether it is in the U.S., Asia, Africa, Europe, on different levels.” 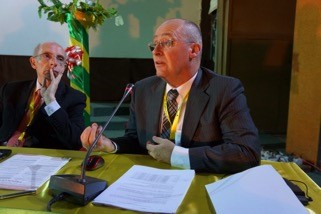 Another inspiring person for Uitdehaag was Sir Dennis Byron (1943), who at the age of 72 is still active as the president of the Caribbean Court of Justice. Uitdehaag: “He has a long history in law and was, among others, president of the International Criminal Tribunal for Rwanda, sitting in judgement of the war crimes committed during the Rwanda genocide that killed nearly 1 million people. Still a very dynamic personality, convinced of the importance of the principles of rule of law in our society. As a member of the Board of UIHJ I have the honour of working together with him in strengthening the rule of law, especially in the field of enforcement in the Caribbeans. When I met him, some months ago, I asked him: “Aren’t you tired?” He looked at me and said “I deleted this word from my dictionary”.”
Finally, Uitdehaag names two colleagues and friends within his profession, whose dedication and motivation are still an example to him: former presidents of the UIHJ Jacques Isnard from France and Leo Netten from the Netherlands. Uitdehaag: “They have made UIHJ into the international legal organisation it is today: with 86 member countries, one of the major international organisations in the field of law worldwide.”

According to Uitdehaag, there are many things the Netherlands and the EU could learn from other countries and regions. “For example from the 16 French-speaking countries in Africa, organised in the OHADA, which are already two or three steps ahead of the EU: they have a trans-national court and unified legislation in a number of legal fields. That’s very interesting to observe. In the field of cross-border cooperation we can most definitely learn from them.”

Other inspiration can be found in the Baltic states, for example, in the field of IT. “Their advantage is that they do not have this bureaucracy of approval after approval after approval one needs to go through if you aspire to implement something new at home. Their organisation is much flatter. In the field of enforcement, they introduced e-auctions, comparable with eBay, conducting public sales through the internet. The manner in which we still do it in countries like France, Belgium or the Netherlands is completely outdated.”

He adds: “In those countries, unlike in the Netherlands, they do not mind if you come up with ‘crazy’ ideas’.”

‘Drive-through’ at local government in Georgia

What if you would suggest a similar system for the municipalities in Belgium or the Netherlands?

Uitdehaag came across more innovative ideas in Georgia. “They introduced a ‘drive through’ for obtaining your passport and driving license. You simply sit in your car, drive up to the first counter and place your order. Then you continue to the second desk, where you pay and at the third desk you will receive your new passport or driving licence. All within 20 minutes. Amazing. What if you would suggest a similar system for the municipalities in Belgium or the Netherlands? They would think you must be crazy.” 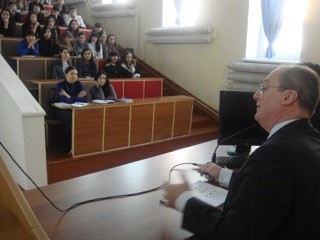 Uitdehaag says he engages in legal capacity building for the legal challenges, but also because he likes to travel, to meet people and to see results. “Yes, you do see the
fruits of your work. It’s not simply copying the French, German, Belgium or Dutch system, which are not always the best or the ideal systems. You try to contribute by transferring best practices from different countries. When you see these are implemented and functioning and people are happy because they are able to make a living, you have succeeded.” He returns to most countries where he has carried out projects and also maintains contact with the countries through the UIHJ.

A superior position does not work and is the biggest mistake you can make as an expert.

Uitdehaag notes that the main challenge in his work is language. “We use English as the main working language in the projects. But I think it would be an advantage if we would be able to communicate in the local language. In my case often Russian or Serbo-Croat. That would be a real advantage also in understanding the context more. When using translators, you always lose something.” He emphasises that the most important thing in this type of work is to show respect to the people you are working with. “A superior position does not work and is the biggest mistake you can make as an expert. I am not there to show them how to do it or as the big saviour. I am there to contribute to the improvement of the legal system. With the knowledge I have to share with them. And always with respect for the habits and culture, also the legal culture, of the country”.

Uitdehaag advocates time and diplomacy to convince people of your good intentions, which might take a long while. In none of his projects has there been a lack of cooperation by the receiving state, something he attributes to his affiliation with the UIHJ. “The Union is one big family and, in that context, it’s easy to convince people to work with you.”

Uitdehaag: “In September I will be in Chisinau to attend, amongst other things, a conference on Thursday and Friday, on Saturday I will fly from Chisinau to Vienna and then Paris and on Sunday I will fly to Guadeloupe. After two days there, I will continue to Miami. From Miami I will fly to Montego Bay on Jamaica and from Montego Bay to Atlanta. From Atlanta I will fly back to Paris, from Paris to Vienna and from Vienna to Tirana. All in one week.” He smiles. “I am looking forward to taking all those flights.”