Inside CILC: Stories from an enforcement agent about capacity building in civil enforcement (1/2)

“Most attention in legal capacity building projects is paid to improving litigation and training the judiciary and legal professions. Often, one forgets that once there is a judgment, you can frame it and put it proudly on your wall, but justice has not yet been achieved: in the end, one also wants to enforce what is stipulated in the judgment. Without a functioning system of enforcement, this won’t happen.” In this CILC story, enforcement agent Jos Uitdehaag will provide insight in his activities as legal capacity building expert in the field of civil enforcement, drawn from his long experience as enforcement agent advising various countries all over the globe.

In most countries where enforcement agent Jos Uitdehaag – who used to run a large enforcement agent office in the Netherlands with two partners – operates, he experiences that enforcement is being neglected, in particular in the South and the East. “It is not the most popular topic. In capacity building projects, it is improving litigation and training the judiciary and legal professionals that receives the most attention. One often forgets that judgments are not for framing and hanging on the wall: justice has not yet been achieved just because we reached a judgment. In the end, you want to enforce what is stipulated in the judgment, which in practice often translates into receiving your money. Without a functioning system of enforcement, this won’t happen.”

If you want to have a more stable state and for a state to have more financial resources, one should focus on enforcement of civil claims and tax collection as well.

However, Uitdehaag notices that within Europe, to a growing extent, attention is being paid to drafting and implementing necessary enforcement measures – for example by the International Monetary Fund (IMF). “If you want to have a more stable state and for a state to have more financial resources, one should focus on enforcement of civil claims and tax collection as well.” He adds that without a proper functioning system of enforcement, foreign companies will not be interested in investing in the country either.

On the road eleven months a year 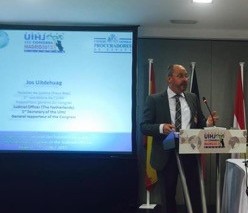 Uitdehaag officially still works as an enforcement agent in the Netherlands. However, since 2010 he decided to focus full-time on his international activities. “I did not regret this choice for one minute”. He enjoys the variety that comes with the international assignments. “One week in this country, the other week in that country. I think that I am on the road eleven months of the year. All over the world. The last couple of years my home base has been more in cities like Tbilisi and Belgrade than in my home city Roosendaal. The coming year, this base in Georgia and Serbia will be traded for one in Moldova.”

Capacity building in the field of enforcement 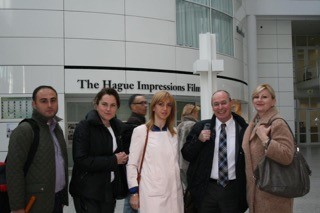 Capacity building in the field of ‘enforcement’ mostly involves advising on the drafting of legislation in the field of enforcement, the execution of judgements, the establishment of enforcement agent systems and sequestration. Uitdehaag: “Within EU member states, EU regulations are applicable. What we as capacity building experts are trying to achieve in our countries of operation, such as currently in Moldova, Serbia and Bosnia and Herzegovina, is to communicate international standards and best practices. We often begin with assessing the existing legislation and, if necessary, try to improve it. Every country has its own specific issues.”

Uitdehaag: “After the legislation process has been completed and brought up to international standards, we start focusing on implementing the legislation, such as the organisation of enforcement agents in a country, their education, but also their organisation through the ministry, their supervision and disciplinary measures. Furthermore, we pay attention to raising public awareness among lawyers and judges, as well as creditors and debtors, and the general public, whoshould become aware of the changes to their enforcement system.”

Uitdehaag is a board member and secretary of the Union Internationale des Huissiers de Justice et Officiers Judiciaries (UIHJ), the international professional association for enforcement agents which, domiciled in Paris, with 86 member states worldwide, is one of the largest professional associations for legal professionals. “The UIHJ has a United Nations (UN) observer’s status in the UN Economic and Social Council (ECOSOC) and the United Nations Commission on International Trade Law (UNCITRAL) and the Council of Europe’s Commission for the Efficiency of Justice (CEPEJ). It cooperates with the European Union, the Organisation pour l’Harmonisation en Afrique du Droit des Affaires (OHADA), the treaty for French speaking African countries in Central and West Africa, the Organization for the Harmonization of Business Law in the Caribbean (OHADAC), the Association of Southeast Asian Nations (ASEAN), the World Bank and the International Monetary Fund.” In addition, Uitdehaag is board member of the Dutch professional organisation of enforcement agents, the Royal Professional Organisation of Judicial Officers (KBvG). 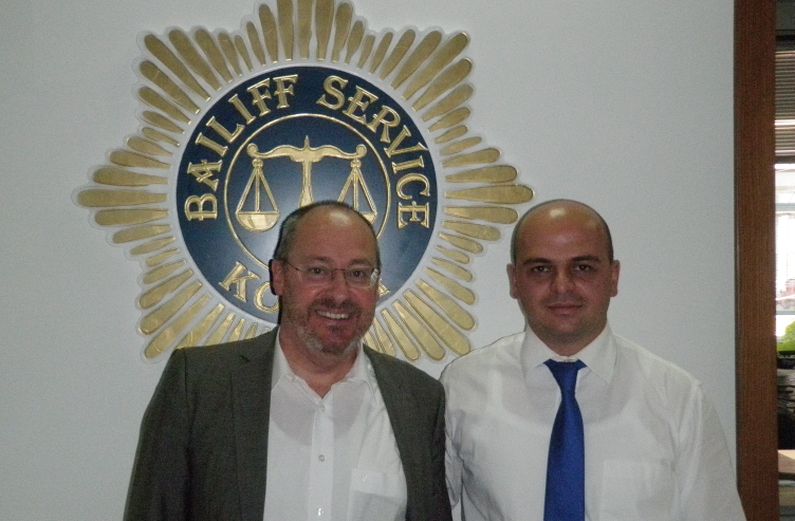 Living out of a one square metre suitcase

Uitdehaag: “After being at home for two days, I already start looking for new opportunities to go abroad. The international projects have taught me that there are only a few things one really needs to live on. During eleven months a year I live out of my one square metre suitcase – I have come to realise I do not really require more, except for my books. I am perfectly satisfied with that.”

I noticed very young professionals, fresh from university, moving into positions of high responsibility at the ministries. They were extremely motivated and driven in their work, something civil servants in the Netherlands could take as an example. I very much enjoyed working with them.

Uitdehaag, who is currently the only enforcement agent CILC is working with, started his activities in the field of legal capacity building with CILC in early 2000 with an EU enlargement project in the field of enforcement. He particularly recalls being quite impressed by working with the Baltic States. “In 2003, under pressure by the European Union, these countries changed their enforcement systems. I noticed very young professionals, fresh from university, moving into positions of high responsibility at the ministries. They were extremely motivated and driven in their work, something civil servants in the Netherlands could take as an example. I very much enjoyed working with them.”

Since there is so much work in his field and there are not that many enforcement agents operating in international legal capacity building, Uitdehaag also works for other organisations. After the Baltic States projects, he participated in capacity building projects in a wide range of countries – either for CILC, the UIHJ, the CoE, EU or other international donors such as USAID – in Slovenia, Bulgaria, FYR Macedonia, Serbia, Kosovo and the other Western Balkan countries, Georgia, Russia, Ukraine, Azerbaijan, Turkey, Kazakhstan and Vietnam. Through the UIHJ, Uitdehaag knows most other enforcement agents working on legal capacity building projects.

In the majority of capacity building projects, Uitdehaag experiences a tendency towards the enforcement agent as entrepreneur. “Countries expect that in such a self-employment system, the enforcement agent will no longer be a burden on the government budget. However, they do not realise that in this system, it’s crucial that the government should supervise and control the enforcement agents and develop a system of disciplinary sanctions. Such control is mostly carried out by both the professional organisation and a department within the Ministry of Justice, or, as in the Netherlands, a special agency for financial supervision.” 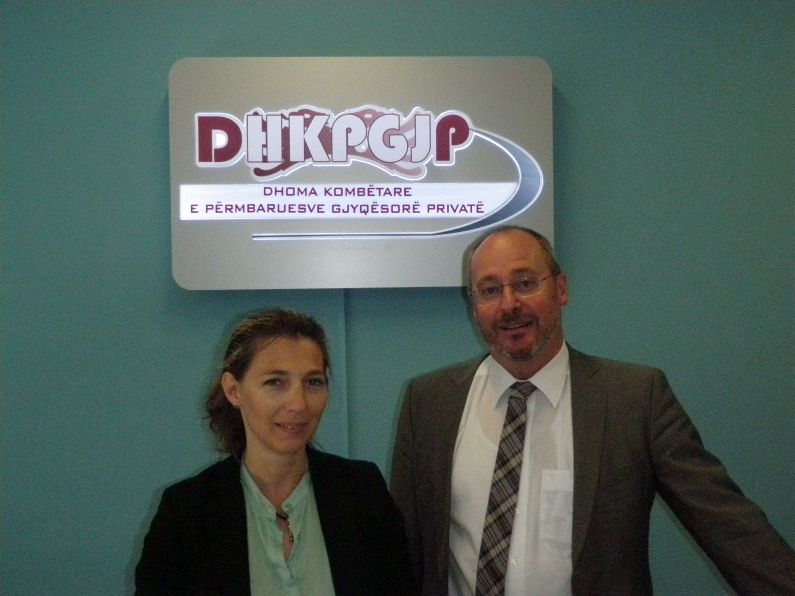 Regardless of the system, according to Uitdehaag enforcement agents all over the world are not that different from each other, facing comparable challenges. “As an enforcement agent you are not the most popular person around. People rarely realise the importance of being able to use the services of a enforcement agent. Often they wonder what your intentions are and if you indeed have come to take away from them the only few things they own.” He notes that although the enforcement procedures may be quite similar everywhere, the implementation in both legislation and practice can be very different. Uitdehaag: “The advantage of having worked as a enforcement agent myself is that I can easily talk and relate to enforcement agent colleagues in other countries. One knows and has experienced how it is to deal with potential aggression by a debtor.”

In many of those countries people have many more reasons to be worried about certain things, about their living standards or about ways to survive. Priorities are often ‘just a little bit’ different there.

During his assignments Uitdehaag experiences in real life those things one normally only sees on TV. “Being there helps me truly understand what they are talking about”. He travels to countries most people would not usually choose to holiday in and has contacts with people he would never have met by staying at home. These experiences have taught him how ‘spoilt’ the Dutch in the Netherlands can be. “In many of those countries people have many more reasons to be worried about certain things, about their living standards or about ways to survive. Priorities are often ‘just a little bit’ different there. Everything is relative.”

At times Uitdehaag does wonder what he is actually doing out there, for example when working in the Western Balkans. 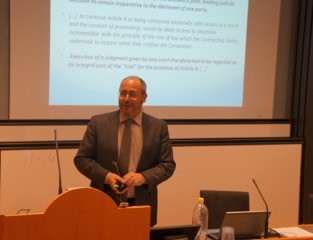 He recalls: “At some point I arrived in Pristina, Kosovo, on the late night flight from Vienna. It was delayed and I arrived far after midnight. I waited for my suitcase. But it did not arrive. After all the luggage had been unloaded, I knew my suitcase just would not come. Outside the airport there was only one taxi still waiting for passengers, a shabby Mercedes from before WWI with a driver who looked even shabbier. From the airport, it should take about 20 minutes to reach Pristina, but the road was covered with a lot of snow and ice and extremely slippery. Halfway the car engine stopped. No petrol.” The driver stepped out of the car. “No problem” he told Uitdehaag and opened his trunk to collect two plastic bottles, after which he started walking at a slow pace toward a petrol station. Uitdehaag: “That was in the middle of the night, around 2 a.m.” The driver returned after half an hour and delivered Uitdehaag to the hotel at 3.30 a.m. “Of course, the doors of the premises were closed. We had to knock on the gate. Well, by then I was wondering what I was doing. Was this still fun? But soon one carries on.”

On to the second part of this interview…