On 18 September CILC and our partner organisation, the Dutch Council for Refugees launched the new project Further strengthening asylum and migration management in Bosnia and Herzegovina. This initiative aims to increase access to a fair and efficient asylum procedure and enhance the treatment of legal and illegal migrants in Bosnia and Herzegovina. The two-year project is meant to contribute to strengthening the capacities of the Bosnian migration authorities, as well as to introduce the concept of the chain approach, involving the entire network of actors in the asylum and migration system. 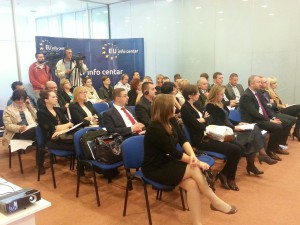 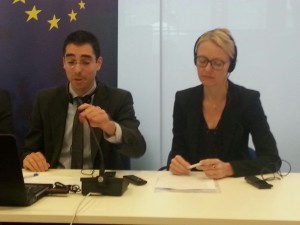 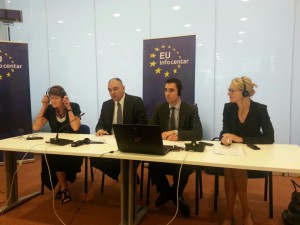 At the EU Info Centre in downtown Sarajevo, more than 30 asylum and migration experts attended the project launch, which included orations by the Secretary General of the Ministry of Security of Bosnia and Herzegovina, Mr. Bakir Dautbašić, and the Deputy Head of Mission of the Netherlands Embassy, Ms. Loes Lammerts. Both speakers underlined the importance of addressing asylum and migration issues as part of Bosnia’s EU integration process and the related negotiation chapters on the judiciary and fundamental rights, and respectively justice, freedom and security.

In this project we will link Dutch and Bosnian experts through a variety of activities. In 2014 the project will provide support for amending the Bosnian Law on movement and stay of aliens and asylum and for enhancing  border crossing point procedures and migrant admission procedures. Together with the Dutch Council for Refugees and the Dutch migration authorities (Immigration and Naturalisation Service, Central Agency for the Reception of Asylum Seekers, Repatriation and Departure Service), CILC will coordinate a comprehensive activity schedule (download the project fact sheet and work plan).

For CILC this new initiative broadens the scope of our rule of law portfolio. It is the first time we implement a bilateral project centred on asylum and migration and it creates a welcome opportunity to further strengthen our cooperation with the Dutch migration authorities and the biggest refugee assisting organisation in the Netherlands – the Dutch Council for Refugees.

The project Further strengthening asylum and migration management in Bosnia and Herzegovina is funded by the Netherlands Ministry of Foreign Affairs under its Cooperation Programme on the Rule of Law for pre-accession countries (Matra CoPROL).

Asylum and migration management in Bosnia and Herzegovina