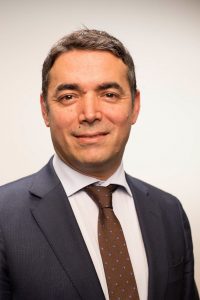 It is with great pleasure to announce that CILC Associate Nikola Dimitrov has been appointed as the new Foreign Minister of Macedonia. Nikola’s diplomatic career started in 1996 as a human rights officer of the Macedonian Foreign Ministry. Since then, he has served as the Deputy Minister of Foreign Affairs, National Security Advisor to the President, Macedonian Ambassador to the United States, National Coordinator for NATO Integration, Special Envoy of the Government for European and Euro-Atlantic Integration, Co-Agent before the ICJ, Ambassador to the Netherlands and Permanent Representative to the OPCW.

The appointment of his Social Democratic Union party signifies the end of a two-year political crisis in Macedonia. As part of the new government, Nikola has expressed that he will prioritise joining the EU by focusing on overhauling courts, strengthening the rule of law and reviving talks with Greece.