Macedonia // Together for Accountability

On 5th March 2018, the Center for International Legal Cooperation (CILC) supported by the Netherlands Prosecution Office and the Netherlands Embassy in Skopje launched the project “Together for Accountability: Supporting the Special Public Prosecutor Office of Macedonia in strengthening its operational and international judicial cooperation capacities”.

During the launching, the Ambassador of the Netherlands to Macedonia, Wouter Plomp, highlighted that justice needs to be applied equally to everyone, regardless of the political party or government coalition they come from: ‘The SPO is to establish accountability for past wrongdoings revealed by the wiretaps and we support it in this important task. To avoid future wrongdoings, it is essential that any government or coalition only puts up people for public office who have the required professional capabilities, who have integrity and who are honest’. 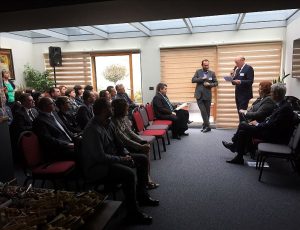 Financed by the Netherlands Ministry of Foreign Affairs under its Matra cooperation programme, the three-year project (2017-2020) with a total budget of € 649.990,  supports the rule of law consolidating in Macedonia, establishing accountability and building trust in the Macedonian justice system in the midst of the biggest crisis of impunity since Macedonia’s independence.

Through peer to peer cooperation and innovative coaching approaches, the project therefore aims at supporting this Office in its investigation and prosecution mandates through: