CILC director Willem van Nieuwkerk, remarked in his opening speech: “The Shiraka family is a strong one. We’ve started to create something special and there’s clearly a need to continue exchanging and learning from each other. Former participants have taken the initiative of creating a Shiraka alumni association and I hope that this will become a sharing and learning platform for legal professionals in the Arab region.”

On 11 June 2019, we kicked-off a three-week Shiraka marathon at the CILC Meeting & Training space. By having the two training courses consecutively, both groups were able to meet each other during the meet & greet event and the networking reception. The meet & greet served as a more intimate get together for the participants to informally connect and exchange about both their work back home and their time in the Netherlands. 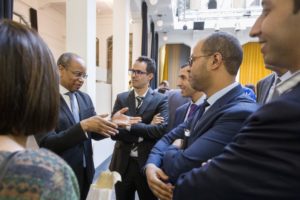 During the networking reception, Shiraka participants further shared their experiences with the present ambassadors, representatives of the Dutch Ministry of Foreign Affairs, RVO and the National Ombudsman, Reinier van Zutphen. Judge Mohamed El Kory from Mauritania noted that participating in the Shiraka course and being introduced to the Dutch legal system, and that of his Shiraka peers, presented him with a mirror of what he appreciates most about the Mauritanian legal system and what can be improved. Moroccan judge Nessrine Boussenane admitted that while she was first afraid to participate and leave her comfort zone, in the end it was the best gift she could have received. The training had allowed her to grow on both a personal and professional level. These warm words are a testimony to how close the participants, trainers and CILC team grow as a Shiraka family and the success of the Shiraka program itself.

CILC would like to thank Montaigne Centre of the Utrecht University and the Academy for Legislation for being our partners. The Shiraka Program is financed by the Dutch Ministry of Foreign Affairs and managed by the Netherlands Enterprise Agency (RVO).

Access to justice Alternative dispute resolution Alternative sanctions / detention and probation Asylum and migration Civil and commercial justice Communication Criminal justice Enforcement Family law Fundamental / human rights Integrity and fight against corruption International judicial cooperation Judiciary Justice system reform Law enforcement Legal aid Legal education Legislative drafting Other Policy relevant research Public / administrative justice
WP to LinkedIn Auto Publish Powered By : XYZScripts.com
We use cookies to ensure that we give you the best experience on our website. We assume that you agree with our use of cookies if you continue to navigate cilc.nl.OkRead more