On Monday 3 and Tuesday 4 November 2014, a delegation headed by Mr. Victor Micu, President of the Moldovan Superior Council of Magistracy (CSM) visited The Hague. The aim of the visit was to become acquainted with the latest developments in the area of court administration in the Netherlands and establish contact with the Netherlands sister organisation, the Netherlands Council for the Judiciary (“Raad voor de Rechtspraak”). 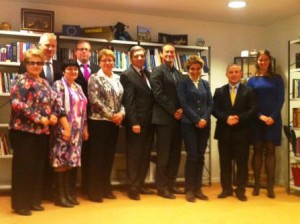 On behalf of the Netherlands Council for the Judiciary, CILC also facilitated in organising visits for the Moldovan delegation to the Permanent Court of Arbitration at the Peace Palace and the International Criminal Court (ICC). During a working lunch at the CILC office, the joint organisation of two exchange seminars between Moldovan and Dutch judges, to be organised in 2015, were discussed. These seminars will be organised by CILC in close cooperation with its Moldovan partner institution, the Institute for Penal Reform in Chisinau, and funded by the Netherlands Embassy in Bucharest.


Enforcement, probation and rehabilitation in Moldova