Montenegro // A probation module for prosecutors and judges

On Tuesday 4 July 2017, Dutch and Montenegrin experts have continued their work on developing a module for Montenegrin candidate judges and prosecutors on probation and alternative sanctions. Montenegrin trainers Jelena Perović and Miljan Vlaović updated their Dutch colleagues Giovanni Meurs and Lino Brosius on the work undertaken the past months, following the initial module building session in February. Their draft module now includes: 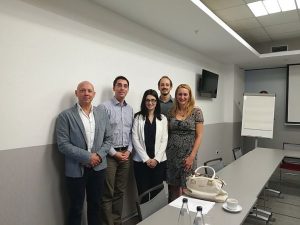 Following the presentations on the content of the module, the trainers looked into various didactic forms to use, teaching methods and education tools, such as web based learning platforms to facilitate discussion. The set-up of this new module underlines the goal to transfer theoretical knowledge into daily practice. The aim is to ensure that newly appointed judges and prosecutors have a thorough understanding of the rationale behind alternative sanctions and a clear picture of their practical application before they take office.

After summer, the trainers will finalise their new module and officially present it to the Montenegrin Centre for Training in Judiciary and State Prosecution. Hopefully in the new academic year the first students can be trained in this important area of law.

This activity is part of the bilateral Dutch-Montenegrin cooperation in criminal law, designed and implemented by CILC and the Netherlands Helsinki Committee, and funded by the Netherlands Ministry of Foreign Affairs under its Matra Programme.

← Indonesia // Training on Legislative Drafting Ukraine // Discussing the legitimacy of power of judges, ethics and integrity →