On Monday 8 July CILC hosted the Young Diplomat Summer School for an introduction to their organisation and a discussion on the work they do. This session was part of a program on democracy and diplomacy, where students discover what the pro’s and con’s are of a democratic state in international relations and diplomacy. CILC director Willem van Nieuwkerk gave the students an insight to the work of CILC and answered the many questions they had. 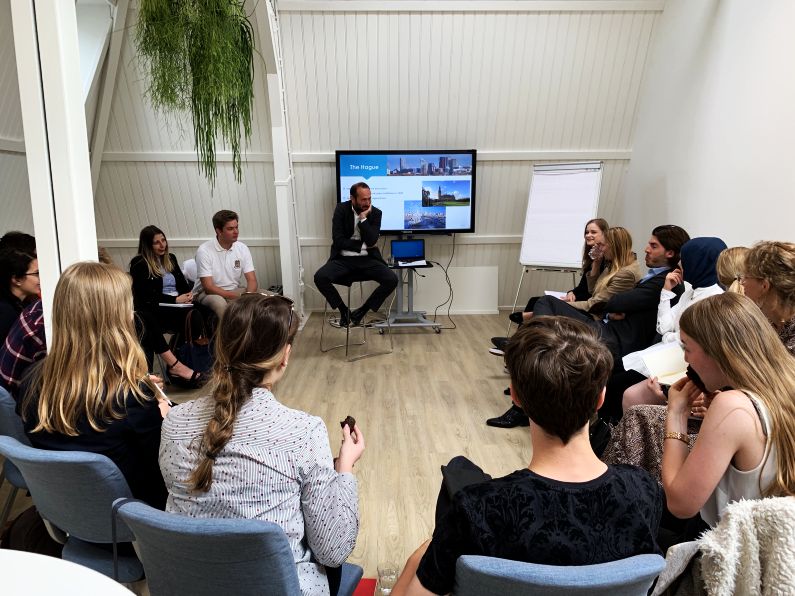 The students quite quickly started asking questions, for instance on the work CILC is doing in Albania with the vetting of judges or on promoting a new code of ethics for prosecutors in Kosovo. Van Nieuwkerk explained that a key factor for fruitful international legal cooperation was that governments themselves request for the legal expertise from the Netherlands as they consider the Dutch solution a useful example for inspiration.
Students found it particularly interesting how he elaborated on the importance of working with and within different cultures, especially to prevent making it look like as if you are imposing a “Western” view of things. A student asked about the current situation in Venezuela, how to move forward when the rule of law breaks down, and how?

The students seemingly enjoyed the frankness of Van Nieuwkerk and his willingness to answer their many and varied questions. The topics were accessible and understandable, making it possible for students to connect what they had learned, in theory, in the morning from lecturers from Clingendael Institute and the Erasmus University to real life.

In relation to the influence of the rule of law on democracy and diplomacy the students found that the session gave them valuable insights. Concluding that the rule of law is an important precondition for a well-functioning democracy. In that way the rule of law ensures a stable basis, not only for the state itself, but also for its neighbours on which it can build (economic) ties. It showed them these ties are built on different levels, diplomacy is not only done by people, but also by organisations. And such ties not only just exist between states, but also on a peer-to-peer level between professionals and organisations. Which in turn are an invaluable link within diplomacy. The rule of law ensures the credibility and flexibility a diplomat needs to use his or her tools to achieve the mandate that was given.

Overall many of the students felt inspired by the visit, which was concluded by climbing the roof of the CILC building and overseeing the many other roofs of the governmental buildings of The Hague. Not a bad end to the first day of the summer school!