Together for Accountability // Special Prosecutor visits The Hague

From 28 May to 1 June 2018, 7 investigators, legal assistants and the Special Public Prosecutor, Ms. Katica Janeva, of Macedonia’s Special Public Prosecutor’s Office (SPO) came to the Hague for a study visit. The visit took place in the framework of the project ‘Together for Accountability, Supporting the Special Public Prosecutor Office of Macedonia in Strengthening its Operational and International Judicial Cooperation Capacities’. This project is financed by the Netherlands Ministry of Foreign Affairs under its Matra cooperation scheme and aims to support the SPO in enhancing its operational capacities in the area of investigations and prosecution as well as in international judicial cooperation. 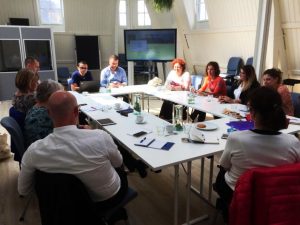 The main purpose of the study visit was to exchange knowledge and practice on the way investigations and prosecution is being done in the Netherlands and to link the SPO with relevant international contacts, organisations and networks.

To this end, the delegation visited the numerous national and international judicial/legal institutions of the Hague, including the Netherlands Public Prosecutor’s Office (OM), Europol and Eurojust.
At the OM office, colleagues from the Financial Intelligence Unit-The Netherlands (FIU), the OM itself and iCOV shared their experiences with the Dutch system in detail, in particular on anti-money laundering cases and our approach to (international) legal assistance in criminal matters. For instance the FIU-the Netherlands, the sole organization in the Netherlands where reporting entities should report their unusual transactions, gave a presentation on their work and how they cooperate on an international level. FIU-the Netherlands is part of a worldwide FIU network via the Egmont group, consisting of 150 FIUs, FIU.NET and the EU FIU Platform, including the Macedonian FIU.

A good example of national legal assistance is iCOV, a cooperation between the National Police, the tax office, the immigration office, the FIU, the OM, the Central Judicial Collection Agency (CJIB), the Fiscal Information and Investigation Service (FIOD) and other special investigation services. It is an ‘infobox’ containing data on criminal activities and unjustifiable assets that can be accessed by the different stakeholders mentioned above for their investigations. In addition to providing specific reports on cases, iCOV also develops risk indicators and patterns to uncover money laundering activities or constructions. In addition, the European Arrest Warrant (EAW) was also explained to the delegation, which may become reality to the Macedonians in the near future depending on their accession to the EU. The EAW is valid for all Member States of the EU and sets out the guidelines and measures to govern extraditions for sentenced persons between Member States. 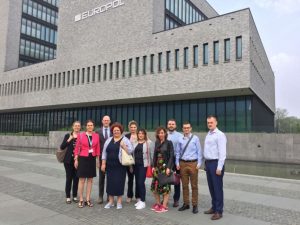 In addition, at Europol the group was introduced to the ‘Universal Forensic Extraction Device’ (UFED). This relatively new equipment can quickly extract digital evidence from any mobile device directly and on the spot. This type of tool can help the SPO speed up their investigations in the case there is a transnational element justifying the involvement of Europol. The operational agreement between Europol and Macedonia which allows for the exchange of information including personal data, is the perfect framework for this type of cooperation and support. In fact, the interest of Macedonia is represented at Europol on a daily basis in the form of a national liaison officer. During the visit, the first contact was made between the SPO and the Macedonian Europol liaison officer.

The meeting at Eurojust was similarly informative and fruitful. Presentations were provided by the National Members of the Czech Republic and Poland. Both presenters stressed the importance for Macedonia to have its own liaison magistrate appointed at Eurojust. This can help the SPO greatly in the execution of its judicial legal requests with other Eurojust states and third parties. It will create in many ways the direct contact which is so needed.

Altogether, the study visit was well received by the Macedonian delegation. The study visit underlined the importance for the SPO to invest in international cooperation. By doing so, the SPO can enhance the capacity and effectiveness of their investigations for example by exchanging relevant information, personal data, innovative tools, etc. Second, the participation in certain networks with a focus on peer to peer exchange of knowledge and best practices will enhance the understanding of some of the most sophisticated crimes and how to best tackle them.