Following its involvement in the fight against organized crime through the regional Western Balkans IPA2010 project ‘Fight against organized crime and corruption: strengthening the Prosecutors’ Network of the Western Balkans’ and the IPA2014 project ‘International Cooperation in Criminal Justice: Prosecutors’ Network of the Western Balkans’ CILC remains committed to continue this path. As of 1 January 2018, CILC joined the German Development Cooperation (GIZ) and the Italian Ministry of the Interior in the IPA2017 project ‘Countering Serious Crime in the Western Balkans’. This 13 Mln.Euro project is funded by the European Commission (DG NEAR) and the German Federal Ministry for Economic Cooperation and Development (BMZ).

The beneficiary countries of the project are: Albania, Bosnia and Herzegovina, the former Yugoslavia Republic of Macedonia, Kosovo*, Montenegro and Serbia. Within the beneficiaries the partners are the Ministry of Justice, the Ministry of Interior, the Public Prosecution (dealing with Organized Crime) and the Criminal Police (dealing with Organized Crime). Whereas in the past two parallel projects were carried out for on the one side the prosecution and on the other side the police, the project will now in an integrated approach be carried out by single embedded country teams, consisting of EU Member States Seconded Prosecutors, Italian Resident Police Advisors, National Legal Advisors and Administrative Officers.

The project will have an implementation period of 24 months and is part of the second pillar (Western Balkans Counter Serious Crime initiative; WBCSCi) of the Integrative Internal Security Governance (IISG), a policy and coordination framework agreed by the Governments of the Western Balkans, the European Union and other international organizations and states. Click here for more information on the WBCSCi and the IISG.

The specific objective of the project is to raise the effectiveness of and cooperation among regional and national capacities in tackling occurring forms of Serious Organized Crime (SOC), including the recovery of illegal financial gains obtained through diverse types of cross-border crime and the fight against illegal migrant smuggling. 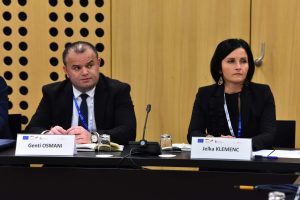 The Managing Team, responsible for the overall implementation of the project is composed of Mr. Christopher Will (GIZ), Ms. Anna Marinelli (Italian Ministry of Interiors) and Mr. Eric Vincken (CILC). For more information feel free to contact Mr. Eric Vincken at CILC: vincken@cilc.nl “