Inside CILC – Shining some light on its history, activities and impact (II)

In the Western Balkans Vincken also came across people who CILC had invested in and who eventually spread the ideas that were planted. Vincken: “For example, we implemented a project financed by the European Commission in Slovenia. It aimed at strengthening Alternative Dispute Resolution (ADR), in particular court annexed mediation. CILC implemented a pilot project at the Ljubljana district court. The president of the court at the time later became Slovenia’s Minister of Justice. He has propagated court annexed mediation through several other projects in almost all other Balkan countries and assisted in its introduction in various Balkan countries including Croatia, Serbia and Bosnia”. In Vincken’s view, this is what enduring results encompass.

“An individual, who initially was a beneficiary, becomes an expert himself and then engages in giving trainings, spreading the idea”.

Vincken continues. “In Moldova CILC invested strongly in training activities in the field of the European Convention for the Protection of Human Rights and Fundamental Freedoms (ECHR). Dutch judges lead the training, aiming at having their Moldovan counterpart-trainee train his peers himself. At some point one of the Dutch trainers, a well-known criminal judge at the Amsterdam district court, Mr. Frans Bauduin, told me “Eric, I really like coming to Moldova, but to be very honest, there is no real need for me to come over anymore since this group of Moldovan trainers by now knows more about the ECHR than most of our Dutch colleagues.

They can do it themselves”. Then you have reached your goal, under the condition that those people do remain a judge”. Vincken explains that in some instances, participants became so well trained that they changed sides and became very well paid lawyers. “Or, in a worse scenario, the government had ‘cleaned’ the judiciary by sacking the reformist judges – some of whom were also ECHR trainers.” Vincken adds: “We strive to achieve sustainability, for example by letting them own their own problem and the whole process towards reaching solutions. Some donors, those with large means, too easily say “we will fix your problem for you”. That is not our strategy. There has been a time in Moldova when I never could gain access to some key public figures because they spent more time in Washington or New York on study visits than in Moldova running their country”.

With regards to Indonesia, Vincken experienced that 30 years down the road, the investment that the Netherlands had made during the 1980s in training promising young Indonesian judges and legislation drafters in Leiden, truly had supported the relationships between the judiciary in the two countries. “When I took over the Indonesian legal cooperation project from a colleague in 2007, those participants meanwhile had reached the levels of director and director general at the Indonesian Ministry of Justice. One of them even had become President of the Indonesian Supreme Court – the top level within the judiciary. They still talked about the Leiden Breestraat. I could very well make use of this so called Breestraat-list of participants for my projects, with the slight difference that by now it was them running their ministries and courts.”

According to Vincken, it really all depends on the project and the particular context whether a project can be called a success. “For example, we supported the Polish Codification  Commission for Drafting a New Civil Code in setting out a long-term vision for the revision of  the existing Polish Civil Code. During the lifetime of the project this revision did not take place and it is unclear whether it ever was eventually implemented. But that does not necessarily  mean that the project has not been successful. We have invested in the commission that  agreed on the contents of a Green Book with ideas and discussions that should lead to a revision  of the Polish Civil Code. That is a success in itself. You invest in people, carry out trainings, train  judges and prosecutors. This is also a success in itself. To really measure and investigate whether they correctly apply the laws, one should analyse the jurisprudence of those countries.  Even then it could very well be the case that they do not apply the laws despite being aware of the fact that legally they should”. 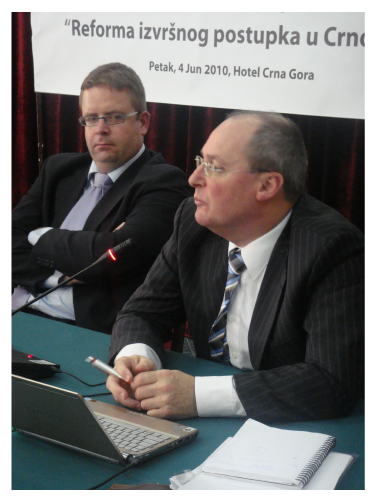 Another example Vincken recalls is a project in which CILC supported the reform of the confiscation and execution law in the Balkans. In several countries this had resulted in a fundamental change of the existing systems, more towards a French/Dutch oriented system – which Vincken considers a success. In one of these Balkan countries, Croatia, a new EU member state, the new system had already been introduced on paper and was due to become effective as of 1 January 2012. After elections in Fall 2011, won by the opposition, the new system was reversed. Painfully, a lot of efforts had been made, licenses had been obtained to provide bailiff services, investments were made in offices, all for nothing. “We tried on all levels, via the EU, the Dutch embassy and the Dutch Minister of  Security and Justice, who was in contact with his Croatian counterpart, to communicate how much of a loss this sudden development was”. Vincken wonders whether one could claim the project has not been successful.

“With the Western Balkans Prosecutor Network we supported several large, very successful operations in which a large number of people have been arrested in different countries and large amounts of drugs have been confiscated and assets frozen. This could be called a success in itself. If it will ever lead to the desired convictions of the suspects is up to the judges in the countries concerned. If the suspects are acquitted, for whatever reason, one cannot claim that a project has not been successful” Vincken notes. He adds “Also, keep in mind that when you are a judge in Kosovo or Serbia or such a place this might happen to you: in the morning you go check your mail and find two envelopes. One contains 10,000 Euros and the other a bullet and a picture of your child. It’s up to you to choose. In the end judges are only people. Prosecutors can also be at risk. I have personally worked in projects with prosecutors from the Balkan countries who had round the clock personal protection assigned to them because of the cases they were investigating”.

Effects of projects at home in the Netherlands

Vincken believes that for many Dutch judges and other legal professionals, taking part in a CILC project, stepping outside their well-known ground can be quite an eye-opener. “When they experience the conditions under which many of their foreign colleagues carry out their work, they often wonder why at home they complain about a coffee that was not warm enough or a temporary struggle with a Xerox machine. They gain a deep respect for their foreign colleagues and their attitude towards their work.”

Transforming CILC to remain relevant for the future

Vincken: “Some years ago we have begun to strongly spread geographically and diversify donors, with a higher ratio of EU funding compared to domestic funding. At this moment, in some regions, project funding is drying out like, for example, in those countries that were granted accession to the EU during the last decade. Although the  Netherlands and the EU remain our largest donors, we are also investing in fundraising among other organisations, such as the World Bank or UNDP. In an ideal situation, CILC would  establish regional offices in certain regions where we operate. This could help us become  more efficient and in this way, we could hire local employees.” He adds “If the means were indeed unlimited, I would like to spread out certain projects in time and of course, I would like to measure the long-term effects of all CILC projects”.

“A country where I expect that CILC could make a significant contribution is the Ukraine. First, it will have to be saved from bankruptcy and in the field of rule of law there is still a lot to be changed. Donors are very much engaged in this. CILC is in contact with the Dutch Ministry of Foreign Affairs here in the Hague. The Netherlands intends to strongly support the rule of law in the Ukraine” Vincken explains. According to him, CILC is trying to mobilise the legal sector in the Netherlands so that, together, they could approach the Dutch Ministry. He adds “It would then have a comprehensive overview of the Dutch offer and could use it for the benefit of the developments in the Ukraine. Currently, a comprehensive judiciary reform strategy is being developed, encompassing different types of projects that will have to be developed for the Ukraine in the coming years, such as reforming the judiciary and the Public Prosecution Service”. An important issue would be the independency of the judiciary, which is not guaranteed at all levels. Other topics would be court efficiency and the position of the Public Prosecution  Service. Recently, CILC organised a meeting with the different stakeholders involved in this  strategy. One of the participants was a Dutch prosecutor who is also involved in the criminal investigation into the Malaysian Airways Flight MH17 airplane crash in the Ukraine on 17 July 2014. During the last six months she has resided in the Ukraine to cooperate with Ukrainian public prosecutors. Dutch judges of the Court of Appeal Arnhem-Leeuwarden, who had recently initiated a tri-partite dialogue with colleague-judges from the Courts of Appeal in Kiev, Ukraine and Kraków, Poland to exchange experiences, also participated. Vincken: “CILC believes that in the field of reforming the judiciary and the Public Prosecution Service, the Netherlands will be able to offer some expertise. However, we will only do it if it suits the Ukrainian context and fits in the comprehensive judiciary reform strategy. Activities and initiatives should not overlap or contradict each other.”

← Inside CILC – Shining some light on its history, activities and impact (I) The Hague // Study week for Moldovan judges →