On Friday 29 March CILC organized and moderated the closing conference of the Matra Project Macedonia Jurisprudence in Skopje.

Backgrounds, main outputs and results of the project were highlighted by high-level representatives of the Croatian Ministry of Justice, the Macedonian Supreme Court, the Macedonian Academy for Judges and Public Prosecutors and the Netherlands Embassy. The event was preceded by a press conference and an introductory speech by the Macedonian Minister of Justice H.E. Blerim Bexheti. Following the opening, CILC legal expert and Judge in the Court of Appeal in Arnhem Mr. Frans Bauduin presented the dimension of the European Court of Human Rights (ECtHR) in Dutch courts and highlighted the implications of ECtHR judgments for Dutch laws and regulations.

This cooperation project brought together Dutch and Macedonian experts who successfully contributed to raise the awareness among Macedonian legal professionals about the relevance of jurisprudence for a transparent, predictable and consistent administration of Justice. The two most tangible results of the project are a book on Macedonian translations of landmark cases of the European Court of Human Rights and the launch of a user-friendly open access case-law database containing relevant domestic and international case-law, improving considerably the access to case-law in the Republic of Macedonia. 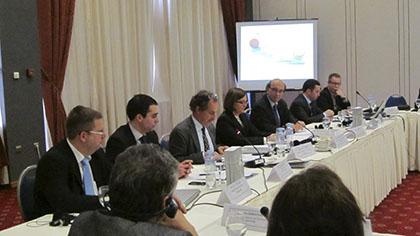 The conference marked the end of the three-year Dutch-Macedonian project. It succeeded in providing a sustainable basis for institutionalized attention and respect for jurisprudence in the Macedonian Judiciary.

This project was implemented from November 2010 until March 2013. It was financed by the Matra Programme of the Dutch Ministry of Foreign Affairs.

For a Macedonian report of the conference follow these links: